Colorado, Avoid Iowa's "Save Are Teacher": Try "Teach Us English" Instead

People in Iowa, avert your eyes for a moment. The shame might hurt too much. Did you see this story? Thanks to Mike Antonucci, I learned today about the “teacher who Un Des-Moines her own protest.” For all you Cleveland Indians fans out there, that’s what we call a pun.

The Iowa State Daily tells us more about the protest:

Earlier that week, students arranged a gathering outside of Merrill Middle School in Des Moines to protest the cuts before the school day started March 8. The rally was organized by Theresa Hoffman’s language arts students while Hoffman got an OK with Merrill’s principal.

“They were very upset that we lost shop and drama [last year], and then when they heard we were going to lose vocal music and that I am retiring and a math teacher is retiring, and they’re not replacing us, they’re concerned with the size of classes,” Hoffman explained

The problem, as Antonucci points out from a freeze-frame in a local Des Moines TV news video, is this prominently featured sign held by a student protesting along the side of the road: 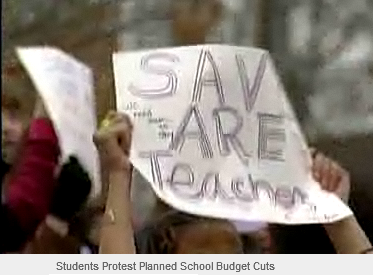 For some reason today, rather than write a catchy response I decided to go with a little virtual finger-painting instead. Here’s a better sign idea for the Des Moines student rally:

Memo to Colorado students: If you plan to demonstrate for more education funding, you might want to consider having a trusted adult proofread your signs first.

In some cases, you can’t count on your language arts teacher to check for you. Because as Antonucci points out, learning the difference between are and our “is presumably what the people of Des Moines are paying Hoffman to teach them.”